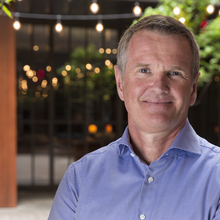 Subscribe to the Secrets of Data & Analytics Leaders blog

With over 40,000 customers, 1,700 partners, and $600 million in revenues last year, Qlik is a leading player in the business intelligence space. To stay ahead of the market and keep pace with rapid technological changes, Qlik spent the last several years developing Qlik Sense, an exploration and discovery tool built on a modern, open platform. Although many QlikView customers have been reluctant to migrate to the new flagship product, Qlik Sense is expected to account for half of the company’s license revenue in 2016, according to company executives.

Qlik’s investment in Qlik Sense corresponds with a slide in net operating profit after taxes. Bowing to pressure from an activist investor, Qlik agreed this spring to be acquired by private equity firm Thoma Bravo for approximately three billion dollars. It’s been three months since the acquisition closed, so we thought it would be good time to catch up with Lars Bjork, CEO of Qlik, to see how the transition is going and where the company is headed.

Eckerson Group: How has your job changed since the acquisition?

Lars Bjork: The big difference is that I can focus pretty much most of my time, if not all, on the business, the client, and operations. The distraction and time I had to spend on informing and educating and staying on top of the communication to the market is given back to me now, so in some way it’s a lot more focused on the business itself.

Eckerson Group: What organizational changes have happened since the acquisition?

Lars Bjork: We’ve had a small reduction in workforce, something we were facing anyhow, but a lot easier to do in a private setting. Primarily, this is hitting back office functions, some in the field, and none at all in product. My team, except for one member out of eight, is signed up and ready to go. If you look at the next layer below the executive team, about 70 people, very few have left or moved on to do something else. With the exception of that small reduction, I would call it business as usual.

Eckerson Group: How has your product roadmap changed since the acquisition?

Lars Bjork: It hasn’t changed at all. What I can say is Thoma Bravo acquired this company because of its exciting and innovative product roadmap. You’re not going to spend three billion dollars for something and then break it up into pieces and potentially distract the businesses. That wouldn’t be wise.

Thoma Bravo has a good understanding of this market for a financial player and sees us as a potential winner here in a few years as this market evolves. We think it’s going to end up being a hybrid cloud market.

Eckerson Group: You’ve lagged behind competitors when it comes to the cloud. What’s your current strategy?

Lars Bjork: I don’t think we have lagged behind the actual market. What you are seeing now is the first movers in this market, the cloud-only vendors, they are going to die by the wayside. I’m referring to Birst, GoodData, ClearStory. They are all struggling; they are all in some kind of process trying to be picked up by others. They don’t have traction.

That’s happening because they made an either-or decision for the customer. It was binary. You have to be all in the cloud or you can’t buy from us. What we think is going to be the outcome is hybrid. You can have data wherever you want. You can deploy wherever you want and all combinations in between. Customers will continue to have data in many different places, more so in the cloud as time goes on. But, I don’t think in my lifetime we’ll see a cloud-only world.

The next version of our business cloud will be released in the fourth quarter. And we already do quite a bit in the cloud through our partner ecosystem, specifically our OEM partners serving SaaS related offerings. We might be late to the hype, but I’ve never believed you make money off the hype. You make money off customers. So many people think the cloud is a differentiator, but it’s not. It is an enabler.

Eckerson Group: What are Qlik’s biggest differentiators in the market and will they change in the coming years?

Lars Bjork: I think we are THE vendor of the modern vendors, and there are only two of them to be very honest, with the strongest product portfolio. I think we are much, much further along when it comes to the back-end engine, the platform, and governance compared to Tableau. And I think Microsoft is in a very different place. They are pretty much just extending the use case for an Excel spreadsheet. Tableau has captured a lot of that market [i.e., Excel as analytic tool]. I think that’s why you see Tableau getting hurt more by it than we are. The [Microsoft PowerBI] product is strong and has a lot of capabilities, but it’s dirt cheap. That can fool a lot of people into buying the cheap solution, but it’s not going to take them very far.

In terms of our differentiators, the openness of the Qlik Sense platform attracts a lot more people from an open source and developer community that were not attracted to QlikView. And our governance story is strong. If you want to roll out self-service visualizations to many people, you need a very robust governance story unless you want to create massive amounts of chaos.

Eckerson Group: How does Qlik with its in-memory architecture survive in the age of big data, machine learning, and streaming analytics?

Lars Bjork: Our big data initiative is going to be very compelling since it will handle enormous amounts of data and it will handle streaming as well. You’ll see us separate from our belief that everything must be held in memory. We are working on an indexing engine that’s extremely fast and can pick up whatever selection of data you make from the underlying data source.

When it comes to machine learning I don’t think we are there yet. It is certainly something that is going to come into the market, but we are not putting a lot of effort into it, at least at the moment.

Eckerson Group: Qlik was always a closed platform - can’t query the database, data model, or the reports. With QlikSense, to what degree has this changed?

Lars Bjork: The guys today that build something in a development environment are Web developers. They would never look for a product like QlikView, but they are really excited about Qlik Sense, and we can see that from our client base. We don’t need to be there to assist them in the same way because they know how to handle it. That doesn’t mean that QlikView is a product that’s going away. It’s still very appreciated and will be around for a long time, but the vast majority of our effort is going to go into the Qlik Sense platform.

Eckerson Group: It seems that a BI vendor needs to offer both a development platform for IT and other developers and a self-service platform for power users.

Lars Bjork: I would agree with you. What we have learned with QlikView is that few people build and many consume. You want to lock it down. You don’t want each and every person to fiddle around with the layout or the data sources because you want it to be consistent, so you don’t end up with different versions and interpretation of the data. I don’t think that is going away, but it doesn’t speak to the other need you alluded to and that’s why we see both of them coexisting.

You can do all of that in Qlik Sense, if you wanted to. You can lock it down in the same way, but it’s more natural to do it in QlikView. Our QlikView customers are very happy with the product and they deliver an enormous amount of value to their businesses. Therefore, they are not going to transition to Qlik Sense. The transition is below the pace we expected. But I think when customers are ready to retire a QlikView application and need to rethink what it should look like, that is when they will evaluate whether they should move to Qlik Sense.

Eckerson Group: What business decision would you take back if you could?

Lars Bjork: I think in all fairness, we’ve seen how well Qlik Sense has been received by the market. It is on par with QlikView in size. It’s going to end the year being the leading product from us, but we probably should have started working on it earlier. We’ve done a phenomenal job, but in hindsight I’d say we were late out of the gate.

Eckerson Group: Are you still having fun?

Lars Bjork: I would say so, otherwise I wouldn’t be here speaking with you! I think there is an interesting next wave in this industry and that’s the broader transition to the cloud. I think it will take a few years before you see it make a real impact on the broader business, and I’m talking about larger clients and larger deployments. I think it’s going to start from the bottom up with smaller companies and that is going to be very interesting to be a part of.