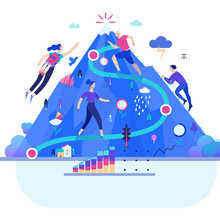 Last month, I attended Domo’s annual user conference for the first time. I came a skeptic but left a believer.

A Trail of Hype. Since its founding in 2010, Domo has consistently pushed the needle of believability. It shrouded its initial launch in secrecy, claiming its technology would rock the business intelligence (BI) world but never provided a shred of detail. At its conference debut, Domo didn’t distribute product literature or give demos at its booth; to see the product, you had to present a VIP invitation to talk with its product marketers in a room at the back of the exhibit hall. When I finally saw the product, my reaction was: “Oh, it’s a pretty dashboard that runs in the cloud. Big whoop.”

Fresh off his sale of Omniture, a web analytics company, CEO Joshua James decided the BI market was ripe for disruption. As a CEO, he wanted to run his business by the numbers, but none of the BI players at the time could deliver an interactive dashboard that put all the data at his fingertips. With a magnetic personality and successful track record, James raised hundreds of millions of dollars ($689 million overall) to achieve his vision.

To jumpstart the process, James purchased a tiny dashboard company, named Corda Technologies, and pumped millions into research and development. But he also funneled even more money into sales and marketing, splashing it on lavish events studded with pop singers, rap stars, business celebrities, and professional athletes. He branded his company’s annual user conference, Domopalooza, which resembles more of a millennial rock concert than a business event. And he has conducted guerilla marketing campaigns (mostly aimed at Tableau) using rappers, like Snoop Dog and Flo Rida, to lure young data and analytics professional into the Domo universe.

So when it was my turn to attend Domopalooza this year, I didn’t come with high expectations. I didn’t plan to attend the nightly concerts, which featured Boyz II Men, or the day of free skiing in the mountains around Salt Lake City. And I wasn’t going to be impressed when football star, Drew Brees, would toss footballs into the crowd or when movie producer, Judd Apatow, discussed Hollywood.

Yet, by the end of the first day, it dawned on me that the Domo team has created something special. They’ve created a bonafide, cloud-based, modern analytics platform that is scalable and user-friendly. (Now I know why Domo bought out the entire sponsorship of my 2018 report of the same title.) It can connect to any and all data sources with easy-to-use intelligence connectors; it can store all your data in a highly scalable persistent repository; it has robust development environments for creating data pipelines and custom analytic applications; it has built-in engines for alerting, artificial intelligence, storytelling, collaboration, and transactions; it offers several packaged applications that run on its platform; and it delivers fast performance via its high-speed, in-memory cache.

But more than its technical specifications, what won me over, is that its customers love the product and aren’t afraid to endorse it. These are brand name companies, such as Fidelity, L’Oreal, and Trip Advisor.  And more surprising, many were happy to demo their applications live to an audience of several thousand. Many said things that made me pause to see if I heard them correctly, such as “We use Domo as our data lake” or “We use Domo as our data science platform.” Here’s a sampling:

Financial Services - “We bought Domo for our executive team, but it worked so well, we deployed it to thousands of people across the company.”

Consumer Packaged Goods – “Domo is not a BI tool; it’s a data platform that holds all our data and delivers thousands of governed data sets to hundreds of business users across all our business units.”

Internet Travel Services – “We create our machine learning models in Domo and use its mobile alerts feature to tell us when it’s time to update our models.”

Construction – “Before Domo, we relied on gut instinct to determine what was going on at a job site. Now we check our dashboard before we arrive and know exactly what’s going well and not, and where we need to focus. The next step is to pull data from drones to streamline the data collection process.”

Pharmaceutical – “To solve a data integration problem, I got a free trial to Domo and assigned two college grads with little technical experience to the task, which they completed in a couple of weeks, even before the trial expired.”

Domo Prospect – “Our first project with Domo was a success, but we didn’t think it could handle our supply chain data and analytics needs. After talking with Domo customers who have more complex supply chains than we do, we might standardize on Domo as our data and analytics platform, replacing Cognos, Tableau, Informatica, and possibly Google BigQuery. This is a real game changer.”

After almost a decade in business, Domo’s youthful experience has tempered with age. It no longer tries to circumvent IT during the sales process now that it has a compelling platform to talk about. It’s largely stopped its guerrilla marketing campaigns, although Domopalooza is still a celebrity fest. Most recently, its initial public offering lowered Domo’s valuation by two thirds to $700 million—this was a big come-down for James, who said on stage, “When you put this much [money] into a company, you expect we would be bigger at this stage. But we’ve invested enough to get to profitability.”

The good news is that Domo’s hype now has a kernel of truth to it. Whereas other cloud BI vendors have struggled (e.g. Birst and GoodData), Domo has invested enough money to achieve critical mass—it now boasts a comprehensive data AND analytics platform that scales sufficiently to run small and medium-sized businesses, and possibly large ones. And most importantly, it has a large number of happy customers who want to extend the platform to support all business users and their analytic applications.