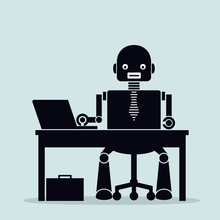 Perhaps in a not-too-distant future, business people will not know what business intelligence (BI) is. No decision maker will log into an analytics platform or mobile app, sift through dashboards, run queries, or manually build visualizations. Instead, they will be notified by their phones or smart speakers on their way to a meeting or while making breakfast that, “The current ad campaign should increase unit sales by 13%, but if you ran 6% fewer adds in Rhode Island and 6% more in Vermont, the ad campaign should increase unit sales by 17%.”

Twenty years ago, maybe even ten years ago, this scenario would have been considered outright lunacy. Today, however, it’s on its way to becoming reality.

Zion Market Research estimates that the predictive analytics market will grow from $3.49 billion in 2016 to 10.95 billion in 2022, and last year IBM predicted demand for data scientists and advanced analysts will increase 28% by 2020. According to the Consumer Technology Association, smart speakers sales grew 279% in 2017 and predicts a 60% increase in 2018. And now, most major BI platforms partner with a natural language generation vendor and have natural language processing capabilities, making it easier for users to query data and consume insights.

BI vendors continue to make their tools as smart and informative as possible. As a result, organizations increasingly ask for predictive analytics and data science capabilities and expect a certain amount of automation and intelligent features in their BI tools. Domo is a good example of a BI vendor that has added these types of features, bringing the future closer to now.

From its inception, Domo wanted to enable customers to run their businesses from their phone and offer data science capabilities in a simple, easy-to-use way. Domo’s latest enhancements to its intelligence platform, Mr. Roboto, gets them one step closer to achieving both goals. Mr. Roboto is a machine learning infrastructure that supports data science capabilities. The following enhancements will ship this summer.

Smart alerts. Last year Domo released statistical alerts that notify users when certain conditions are met. Now, thanks to Mr. Roboto, Domo can automatically send mobile alerts when it detects anomalies and correlations. So, if data deviates from what is normal or a correlation with a new internal or third-party data set is found, Domo sends alerts. Smart alerts enable users to stay abreast and react to changes or new insights about their business in real time, all from a mobile device.

Additionally, users can select whether they want to continue or stop receiving similar alerts, training the system to individual preferences. Users can also customize who is alerted and write personalized messages to each recipient using natural language generation technology.

Smart alerts are a peek into the future where BI tools come to the user with information, rather than the user going to the BI tool for information. When this happens BI will become invisible and pervasive in organizations.

Predictive Analysis App. Domo also released the Predictive Analysis App that leverages the Mr. Roboto infrastructure. The new product enables users to do what-if analysis on data sets. Once users connect to a dataset, the app presents a small visual profile of the data to help users choose which variables to use in the predictive model. Once created, Mr. Roboto sets the optimal levels for each variable to maximize the prediction, and users can then adjust the variables to see how it changes the prediction. Below in Figure 1, the Predictive Analysis App uses the number of customer employees to predict contract sizes, which are divided into industries and put in revenue buckets. 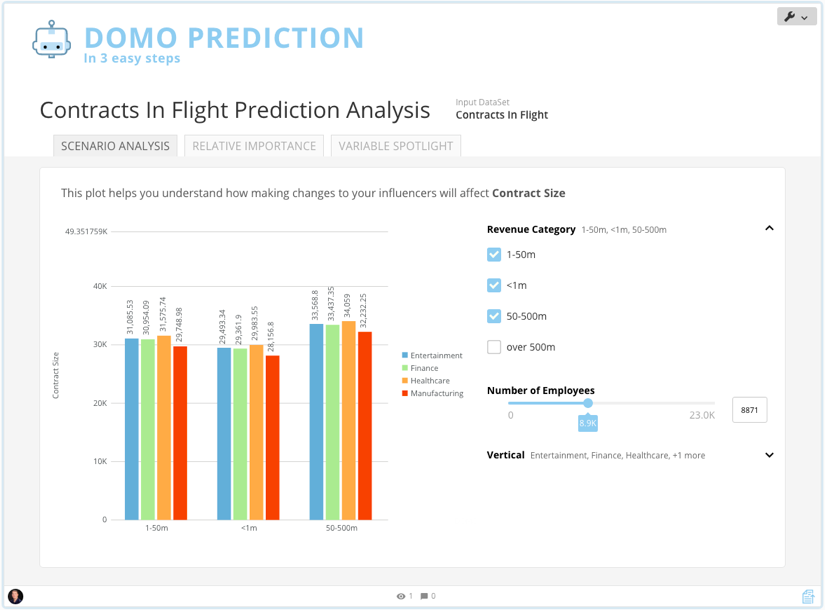 Domo and other BI vendors automate and integrate intelligent and predictive capabilities into their products to simplify the user experience and usher in a future where BI is invisible and pervasive. Before long we might see the perfect BI future become reality. 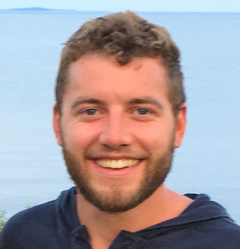