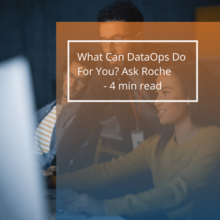 What Can DataOps Do For You? Ask Roche

Subscribe to the Data Strategy Insider blog
Secrets of Data & Analytics Leaders · What Can DataOps Do For You? Ask Roche - Audio Blog

ABSTRACT: Biotech giant Roche has decreased cycle times by migrating from a traditional data warehouse to a DataOps-driven data mesh.

Everyone knows they need DataOps, but they don’t know what it is or where to start. DataOps is a mindset, a practice, a process, and a set of technologies. No wonder people are confused.

One company that has embraced DataOps and experienced its benefit is Roche, one of the world’s largest biotech companies. It is using DataOps practices and tools to help it migrate from a traditional monolithic data warehousing architecture to a distributed data mesh architecture in the cloud.

Like many companies saddled with a legacy analytics architecture, Roche experienced data bottlenecks that prevented it from leveraging data for business advantage. It took an average of three months to scale compute power; three to four months to deliver a new software release; and four days to implement a hot fix. Business satisfaction with the data team’s performance was low.

Data Mesh in the Cloud. To revolutionize its performance, the data team decided to migrate from its legacy, centralized architecture to a distributed one based on data mesh concepts implemented with the Snowflake data cloud. Snowflake provides a common data and governance backbone for Roche’s numerous domain teams, who are now empowered to service their own data needs through the data mesh.

Starting in early 2021 with a single department, Roche onboarded 40 data product teams that have created 50 data products. The data team has increased its delivery cadence from one release every three months to an astounding 120 releases in one month. Overall, the data mesh environment consists of 1300 users who can access 180TB of data. That’s an impressive amount of work, done in a year and a half.

The data team has increased its delivery cadence from one release every three months to an astounding 120 releases in one month.

Paul Rankin, head of Data Management and Architecture at Roche, cites the combination of Snowflake and DataOps.live as keys to his team’s extraordinary turnaround. “DataOps.live enables us to pull all this together in terms of orchestration, deployment, release management, CI/CD—and to do it at scale, making full use of Snowflake’s features as a programmable Data Cloud. It’s a complete game changer. We’re talking about ROI in terms of saving thousands of hours and dollars in processing and developer time.” Rankin presented his case study at the recent Snowflake Summit 2022 in Las Vegas along with representatives from DataOps.live.

Second, he advised rolling out products when they are “good enough,” along with documentation and regular cadence calls. Third, he suggested selecting products that “naturally work in harmony with each other” through API integration and other means.